Buy and sell leading cryptocurrencies. We offer a fixed 5:1 maximum leverage to increase your buying power. Select from over 250 crypto derivatives.

Why Trade Crypto Derivatives With Us

Find your feet with our two account offerings. Our multilingual team is available to help you navigate the financial markets. You can trade at your own pace knowing we are only a phone call away.

The most comprehensive Crypto offering, with 250+ Cryptocurrencies including Crypto-crosses and Crypto indices.

Choose from over 250 Crypto derivatives without the need to create a wallet. Start today and fund with PayPal, Credit/Debit card, Skrill & more.

Established in Australia and now regulated in multiple jurisdictions.

Trade Forex on Eightcap's award winning trading platforms across webtrader, desktop and mobile, all on our powerful and secure technology infrastructure. 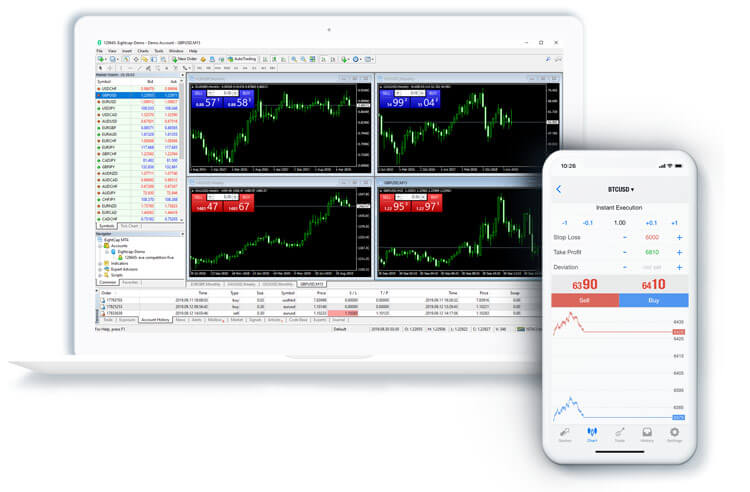 Instant upon approval of KYC+ funding.

We offer ultra-low spreads, more than 250 cryptocurrencies and crypto indices, trading on Eightcap's award winning trading platforms, seamless withdrawals, as many deposit methods as you wish, and much more.

*Data based on spreads calculated from trading data 23.08.21

Bitcoin was the original cryptocurrency and was introduced in 2009. It’s also the most valuable and most widely traded. Bitcoin is viewed as both a store of value and as a medium of exchange, and both of these attributes give it its value. Bitcoin’s code has been copied and amended by numerous other teams starting similar digital currencies, however, Bitcoin is still more valuable than all the other cryptocurrencies combined.

Due to the size of its market capitalization, Litecoin is rendered to be the third biggest cryptocurrency after Bitcoin and XRP. Users go to Litecoin to transfer currencies from one to another but in units of Litecoin, as opposed to USD. Just like the other cryptos, Litecoin is not issued by the government instead, they are created through a process known as 'mining'.

Ripple is a company creating blockchain-based solutions for the global banking industry. These solutions use Ripple’s own cryptocurrency, XRP, which trades freely like any other cryptocurrency. Ripple is being tested by several of the largest banks in the world. This is because the interbank currency market is the largest market in the world, if the tests are successful, XRP will have significant utility underpinning its value. Read More

Ethereum is similar to the Bitcoin blockchain, however, the platform enables users to run applications and smart contracts. Ethereum is known for its decentralization and autonomous functionality which makes it different to other open public networks. Read More

ADA is Cardano’s native cryptocurrency and runs on its blockchain. Cardano’s public blockchain network is very different to that of its competitors, as it's entirely based on mathematical principles. Its network has been developed by cryptography and engineering experts. There are many advantages to the Cardano blockchain, one main one is that its blockchain can be used to create decentralised applications.

Created by Billy Markus and Jackson Palmer this open-sourced digital currency was based on the trending ‘doge’ meme. Elon Musk, Tesla’s CEO has often tweeted about this particular cryptocurrency, stating that it is his favourite coin. Dogecoin uses Scrypt technology and you can either mine this alt coin on your own, or by joining a mining pool.

Founded by the Tron Foundation in 2017, this decentralised platform has its own cryptocurrency, called Tronix (TRX). This platform has now gone global and aims to provide a cost effective way of sharing digital content by allowing content creators to share their work directly with the consumer.

Discover over 250 Crypto derivatives with Eightcap, the largest crypto offering in the world.

Advantages and Disadvantages of Trading Cryptocurrency CFDs
Cryptocurrencies Trading Hours
What is Margin and Leverage in Trading?

Risk warning: Margin trading involves a high level of risk and may not be suitable for all investors. You should carefully consider your objectives, financial situation, needs and level of experience before entering into any margined transactions, and seek independent advice if necessary. Forex and CFDs are highly leveraged products which mean both gains and losses are magnified. You should only trade in these products if you fully understand the risks involved and can afford losses without adversely affecting your lifestyle (including the risk of losing the entirety of your initial investment
© 2021 Smart Profit FX LLC